Truth-seeking and the Potential of Arts

Syrian NGOs and victim groups are increasingly turning to transitional justice initiatives such as truth-seeking, to address pressing justice needs. Truth-seeking is particularly relevant in the Syrian context because of the ongoing impunity but also because of the memory of past atrocities such as the Hama massacre in 1982. In the absence of an official truth-seeking mechanism, informal truth practices are of paramount importance.

Syrian human rights defender Sema Nassar constantly hears the same despairing question: “We want to know what happened. What is the fate of my son or daughter?” Currently, the families of over 100.000 forcibly missing and disappeared in Syria are deprived of that kind of information. Illustrating the case of the Douma Four human rights defenders, Sema insists that revealing the fate of the missing and disappeared is one of the priorities: “Whether they want to pursue accountability or if this truth satisfies them and they can reconcile with it one way or another, or even if they want to find compensation: the first step before anything is knowing the truth.”

Truth-seeking is a difficult endeavour in any case, and even more so in an ongoing conflict that is marked by uncertainty over facts and evidence. In contexts like these, artistic practices can offer more complex understandings of truth. Director of the Syria Campaign Laila Kiki, for example, believes that art and culture can reflect the diverse experiences of the survivors and victims. She gives the example of the Freedom Bus, a bus covered with pictures of missing loved ones that toured Europe, aiming to make their absence visible. It became also a symbol of comfort. “To many Syrians, it became a place for physical gathering in the diaspora, not only for the 100,000 families who have loved ones disappeared in Syria, but also for the movement for justice.”

Playwright Mohammad al-Attar considers arts as a parallel process to justice efforts, that allows  to combine documentary with fiction, to start with real references and real protagonists, but to also appeal to the imagination. He believes that in a situation like in Syria, where the tragedy is still ongoing, arts can “create spaces where you can discuss these difficult topics with more ease, with more freedom, with less tension, with less polarization.” 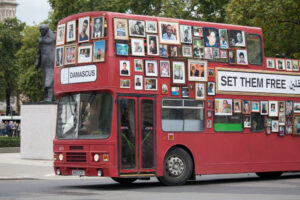 Next episode The Syrian Gulag: Reality and Narratives about the Prison System
Previous episode Criminal Accountability for Syrians and Beyond