The Syrian Gulag: Reality and Narratives about the Prison System

As a central institution of the Assad’s regime’s system of governance, the prison is aimed at destroying political subjects in Syria. Mass imprisonment has a devastating impact on Syrian society.

Despite its omnipresence, an overview of this gulag or system of prisons spread all over the country, was lacking so far. Determined to fill that gap, researchers Uğur Ümit Üngör and Jaber Baker published The Syrian Gulag, Assad’s Prisons, 1970-2020. They looked among others into the intelligence agencies that operate, according to Uğur, like a vacuum cleaner. “They penetrate into society and extract people from it. Then they process these human beings by subjecting them to violent treatment, to torture and other forms of interrogation, and keep them in these prisons for a while.” As Jaber highlights, this prison system has enormous physical, psychological, social and economic consequences. “There are hundreds of missing persons in the darkness of this gulag and no one knows anything about them. This breaks up families.”

Imprisonment is a national trauma that has left its traces in the cultural domain, generating a huge body of prison narratives. In her research project SYRASP,  Anne-Marie McManus relates the functions of these narratives in the domain of among others literature, cinema and visual arts to different verbs: knowing, remembering and feeling; not only as a form of remembrance but also as political contestation. “I think actually one of the major goals of the prison field today is to articulate a new meaning, or a set of meanings around imprisonment and enforced disappearance.” 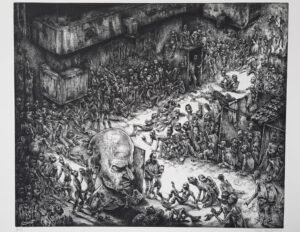