Accountability and the Human Rights Council

Sri Lanka’s present is haunted by memories of the island’s decades-long civil war, which ended just over a decade ago. The war was mainly a clash between the Sinhalese-dominated Sri Lankan government and the Liberation Tigers of Tamil Eelam (LTTE) insurgent group, the latter of which had hoped to establish a separate state for the Tamil minority. Although the Civil War ended in 2009, the current situation in Sri Lanka has only partially improved. A large portion of the Tamil population remains displaced. While there are fewer political and civil rights issues, instances of torture and enforced disappearances persist even in recent years. The Sri Lankan military still occupies predominantly Tamil areas designated as “high-security zones,” though to a lesser extent than during the war. The entrenched impunity for the deaths of tens of thousands of Tamil civilians in the final stages of the war in late 2008 and 2009 in what the United Nations called a “bloodbath”, remains unaccounted for.

In this episode, Tine Destrooper and Sangeetha Yogendran speak with Archana Ravichandradeva, a Canadian lawyer and Senior Advocacy Officer with PEARL, People for Equality and Relief in Lanka, a women-led NGO concerned about the situation in Sri Lanka. In her role at PEARL, she works to build connections with government officials to advocate for justice and accountability on the island. We discuss accountability and transitional justice efforts in Sri Lanka, and in light of developments before the Human Rights Council. 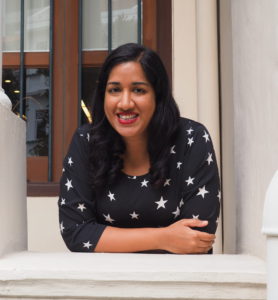 Archana Ravichandradeva is a lawyer practicing labour and employment law in Toronto, and is Senior Advocacy Officer for People for Equality and Relief in Lanka (PEARL).

Photo on the left: Sri Lankan ethnic Tamil women sit holding placards with portraits of their missing relatives as they protest outside a railway station in Colombo, Sri Lanka. © AP Photo/Eranga Jayawardena, 2015.