In this new mini-series, Justice Visions podcast teams up with Impunity Watch to tell the story of Syrian justice actors’ struggle to unlock the road to justice in four episodes. Through interviews with practitioners, Brigitte Herremans, Habib Nassar and Mohammed Abdullah will debate justice efforts for Syrians in the domain of accountability, documentation, victim’s activism, and truth-seeking.

“This is the moment to highlight how innovative approaches by NGOs and victim groups have changed the scene”, argues Habib Nassar. “The efforts of victims and family associations to advocate for the establishment of a process to search for over 100.000 missing and disappeared in Syria led the UN General Assembly in December 2021 to adopt a resolution requesting the Secretary General to conduct a study on how to address the issue of the missing.”

In this first episode, we bring to bear how justice actors challenged the justice impasse by readjusting and applying elements of the transitional justice toolkit. Our guests, Maria Al Abdeh and Mazen Darwish highlight some key achievements. “Syrian civil society actors have been playing a role on advocacy on keeping the narrative of victims alive, especially when some countries are speaking about normalization”, stresses Maria. “At the political level, I think that Syrians also succeeded in keeping the issue of justice and accountability on the table”, argues Mazen.

A key takeaway is the need to look beyond trials and criminal accountability. “It’s important to think about the limitation of criminal justice processes. We need to widen our thought about how many survivors would be able to participate, what justice means to different people, how we can really make justice something that impacts the everyday life of people, especially marginalised communities in Syria”, highlights Maria. The need to go beyond criminal accountability will be the theme of our next episode. 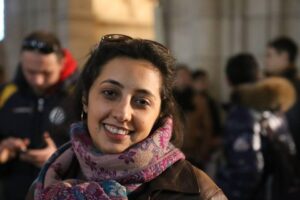 Dr. Maria Al Abdeh is a renowned feminist activist and the Executive Director of Women Now for Development, a leading Syrian women’s rights organization that has championed a gender-transformative approach to human rights and justice matters. 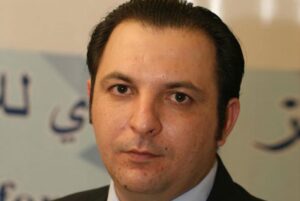 Mazen Darwish is the General Director of the Syrian Centre for Media and Free Expression. He is a human rights lawyer who played a key role in criminal litigation cases brought before European courts. Mazen was arbitrarily detained in Syria as a result of his human rights activism.

Listen to the Arabic interview with Mazen Darwish on justice efforts for Syrians.

Photo on the left: International Day of the Disappeared Ⓒ Paul Wagner, The Syria Campaign

Next episode Criminal Accountability for Syrians and Beyond
Previous episode How do we talk about historical commissions as instances of transitional justice?