This panel discussion zooms in on the ongoing Syrian conflict and the efforts to advance justice. Mohammed Abdullah (aka Artino) is a prominent Syrian photographer and human rights activist. He sheds a light on the Syrian uprising and the importance of justice for Syrians whose lives have been transformed by the conflict. Journalist Inge Vrancken (VRT), who has extensively covered the Syrian conflict and documented chemical warfare in the series The Toxic War, analyzes the power dynamics that entrench the conflict. Researcher Brigitte Herremans (Ghent University) highlights how Syrian and international activists challenge the international passivity and continuously reshape the struggle for justice. Middle East expert Willem Staes (11.11.11) moderates the panel discussion. Register via inschrijven@liberas.eu

This discussion is the opening event of the exhibition Syrians in the Frame in which Mohammed Abdullah foregrounds Syrian civilians. All too often their experiences are relegated to the background in media reporting, eclipsed by the strong focus on the atrocity crimes of the Islamic State or military escalations. Mohammed Abdullah sheds a light on the human side of the conflict and focuses on the resilience of Syrians he has encountered in the besieged city of Eastern Ghouta and a refugee camp in Lebanon’s Beqaa Valley. He shows individuals trying to preserve their humanity during situations of injustice, sieges and bombardments.

Vernissage photo exhibition ‘Syrians in the Frame’ by Mohammed Abdullah at 7 pm. 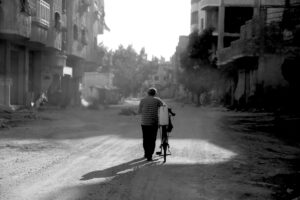 Other events in November