How do we talk about justice for Syrians?

When the Syrian uprising started in 2011, justice and accountability were key demands of the protest movement. Civil society activists and international stakeholders embraced the transitional justice paradigm to accompany the hoped-for transition. However, the Assad regime’s policies of annihilation crushed the uprising and led to a civil war, with an increasing number of perpetrators of crimes. While states failed to provide a meaningful response, Syrian and international stakeholders continue to pursue justice in a situation where impunity seems the norm.

In this episode, Brigitte Herremans makes the case for opening the ‘justice imagination’, stretching the boundaries of what is imaginable in terms of justice. She sheds a light on how justice actors try to overcome the justice impasse, notably with regard to the crimes of forcible disappearances and kidnappings. Brigitte also shares insights from an article she co-authored with Tine Destrooper, exploring the concepts of invisibilization and erasure of experiences of Syrian victims. To demonstrate how these crimes are foregrounded concretely, Brigitte spoke to Maryam al-Hallak and Yasmin Fedda.

Maryam is a founding member of the Caesar Families Association, gathering families who identified missing relatives through a collection of photographs known as the Caesar Files. Her son Ayham was forcibly disappeared and killed by the regime, and she never retrieved his body. Yasmin Fedda is a Palestinian-Syrian filmmaker who lectures at Queen Mary University of London. She directed the documentary Ayouni, chronicling the story of media activist Bassel Safadi and Italian priest Paolo, who are respectively disappeared and executed by the regime and kidnapped by ISIS. Maryam and Yasmin share some of the complexities of this quest and highlight the importance of making sure these crimes are not forgotten. 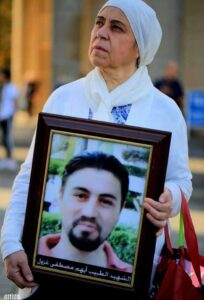 The full interview with Maryam al-Hallak is available below:

Next episode How do we talk about truth in South Africa?
Previous episode Spotlight on Germany and Namibia